In 1914 Charlie Maginnis, an ardent surf caster and club member, conceived the idea of the Ocean City Fishing Club donating a cup of great value to be competed for by fishing teams from various clubs. Maginnis succeeded in raising money for a cup which the maker (J. E. Caldwell & Company of Philadelphia, PA) would not design and create for less than $1,200. At the request of the Ocean City Fishing Club, Mayor J. G. Champion and his fellow commissioners, G. Adams and W. H. Campbell, appropriated $500 from the advertising budget of the City of Ocean City, NJ to make up the difference.

This trophy, which was symbolic of team supremacy in the surf casting world, was believed to have been of greater value than the Davis, Lipton and Stanley Cup trophies, also well known in the sporting world.

The Ocean City Cup was made of sterling silver, and stands 43" high.

This beautiful cup become a famous trophy shedding luster on the City of Ocean City, New Jersey because of the many fishing team casting tournaments in which it was used. The first National Casting Tournament was held on the beach in Ocean City, Saturday, August 12, 1916. The Asbury Park Fishing Club had the first team to win the cup.

Victory was perched on the top of the cup with a mermaid protecting the capture of a large fish by a very happy triton. The seal of Ocean City and the emblem of the OCFC are part of the delicate artistic details shown on the outside of the cup. On the reverse side of the cup at the top was the seal of Ocean City mounted over two crossed casting rods and surrounded by sprays of laurel. A panel extended down the front of the cup was produced by placing a casting rod on one side and on the other side a gaff. The inscription on the front panel read as follows:

The cup had been awarded in competition each year since 1916 to 1984 (except 1944-45). This is believed to be a record for a perpetual trophy in annual competition in the sporting world. The OCFC was the only club to field a team in every cup tournament during that 68 year history of the contest. After 1984 the Ocean City Cup was retired.

The framed picture below shows an angler catching a fish with The Ocean City Cup shown superimposed on the art work. The picture is etched on a sheet of sterling silver (overall size approx. 15" x 15") with fine detail. The words inscribed on the top of the shield are: "Ocean City New Jersey", the words on the bottom ribbon banner are: "HEALTH" "WEALTH" "HAPPINESS". This work is also believed to have been done by the J. E. Caldwell Company of Philadelphia, PA.a
After an Ocean City Historical Museum restoration in the summer of 2004 the museum was reopened. The opening ceremony was held on September 3rd with the ribbon cutting performed by Mayor "Bud" Knight and Museum President Paul Amselm. The Ocean City Cup is an important item on display enclosed in a clear acrylic display case (19 x 19 x 57") mounted on a finished mahogany base (21 5/8 x 21 5/8 x 15"). The Ocean City Fishing Club is pleased with the City of Ocean City display of this beautiful trophy. The replacement Cup and the present Cup are the same physical Cup. 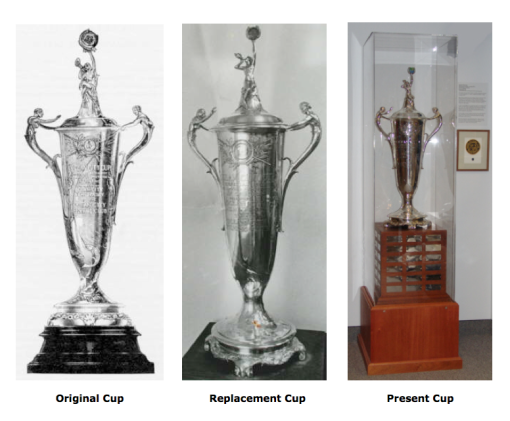