The Ocean City Fishing Club was started in the summer of 1913 and is the oldest continuously operated fishing club in the country. A handful of surf fishermen met on the beach in Ocean City, NJ to pool their efforts towards a common goal of sportsmanship and fellowship. The first meeting of the club was held on August 15, 1913 with twelve members enrolled.

The club was incorporated as the Ocean City Fishing Club of Ocean City, New Jersey on September 4, 1913. Membership over the years has varied from a high of 447 members in 1922 to our present average of 200 members. Tournaments, casting contests, and inter-club fishing team competitions have played a major role in the club's activities.

The Ocean City Fishing Club has had several disasters due to storms and hurricanes that has taken their toll. Severe storms damaged the pier in 1916, 1945, 1949, 1962 and 1992. Because of the members' enthusiasm for fishing, the pier was always rebuilt, improved, and/or extended.

The OCFC pier at 14th Street and the Boardwalk extends 635 feet from the public Boardwalk over sand into the Atlantic Ocean. The outer platform tee (T) is 50 feet wide and 30 feet long with an elevation of approximately 24 plus feet.

Today, the Ocean City Fishing Club still carries on the tradition of good fishing, fun, sportsmanship, and fellowship among the club members and the public.

The Objectives of the Club:

The club is incorporated at Ocean City, in the County of Cape May, and the State of New Jersey. Its pier and clubhouse are located at 14th Street and the Boardwalk in Ocean City. The Ocean City Fishing Club is a private club.﻿ 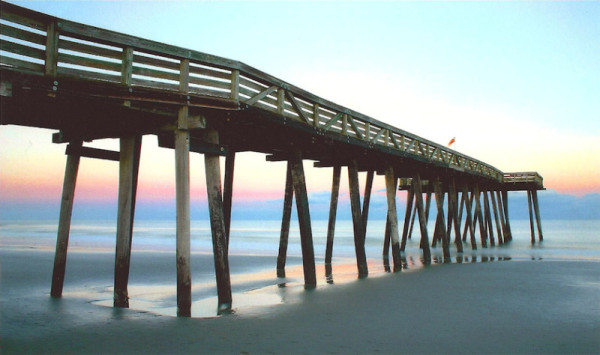 The Fishing Pier at 14th Street in Ocean City, New Jersey by Gerald Lamparter. Click on picture to order a print.