Dates of ASAC Tournaments will be posted on the club bulletin board. 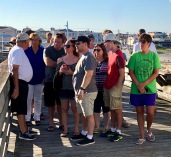 During the open house, club members provided a guide tour, answered questions, and gave a fishing demonstration that brought a number of sand sharks over the railing, which delighted the crowd, especially the many youngsters on the pier.

Benjamin Rogers, 7, of Harleysville PA, tried fishing for the first time with Bob Dever, a club member. The youngster soon took over the rod and reeled in a sand shark with a little help from Dever. .

“That was really cool,” young Ben said proudly. “It was my first time and I caught one!”

Other children also got to reel in lines when Dever hooked up with a fish, all part of the experience of visiting the OCFC pier. Another open house will be held from 6-8 pm, Aug. 2, when the club hopes to top last year’s two-night collection for the food cupboad. Last year, the club greeted 1,835 visitors who donated 186 pounds of food and $746 in cash to help feed those in need.

Charlie Roane, 8, and his family most likely could claim they came the farthest. The Roanes traveled from Mumbai, India, to visit family at the Shore, including a trip to the pier. He also pulled a sand shark over the railing with Dever’s assistance.

The open house coincides with the city’s Family Night on the Boardwalk. Founded in 1913, the OCFC has a strong commitment to community involvement by sponsoring youth fishing tournaments, hosting disabled children, awarding scholarships and advocating for recreational fishing, in addition go helping the Food Cupboard. 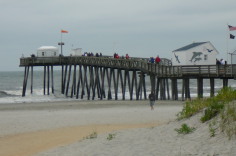 Some South Jersey youths will have their first opportunity to engage in fishing on Wednesday. But these aren’t typical young, summer visitors to the Shore. They’re part of NJ WAVE, Wonderful Adolescent Ventilator Excursion, and will be guests of the Ocean City Fishing Club for an outing on the fishing pier.

“It started about five or six years ago,” said Dan Michaels, an OCFC member. Michaels met the doctor who heads the WAVE program while they both worked at Shore Medical Center and
launched the annual visit to the pier. “They bring about three to twelve youths with their nurses and aides and we give them the chance to fish to the best of their abilities.”

WAVE is a summer camp for children who have medical needs such as medical ventilation, trachs, feeding tubes or daily care. It’s headed by Dr. Cynthia Papastamelos of Linwood, Medical Director of Pediatric Pulmonology at Voorhees Pediatric Facility, which sponsors NJ WAVE.

The free camp lets children experience what other youths enjoy at the shore— the beach, the boardwalk with all its attractions and just hanging out with other kids. While here, they also will venture onto to the pier where some OCFC members will meet the

group at 1 p.m. for some fishing time. Though they may be limited in their abilities, said Frank Pizzutilla, OCFC president, everyone involved gets a lot out of the program. “Some may be able to fish,” he said. “Some, maybe not. Maybe someone will only be able to

touch a fish. But we give them the chance to be part of what we do on the pier. Everyone enjoys it.” 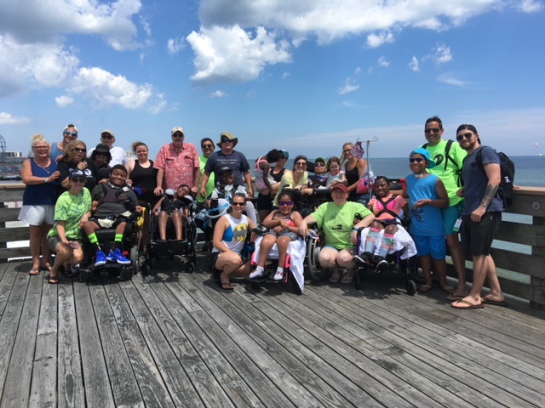 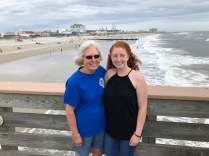 OCEAN CITY — It’s fitting that someone who’s been fishing since a kindergartener is the recipient of the Ocean City Fishing Club (OCFC) scholarship this year. Whether from a boat or the surf, Joelle Tucker, a 2018 Ocean City High School graduate, always has her fishing gear ready, hoping to reel in a tasty catch for dinner.

“I’ve been fishing since I was in kindergarten,” Joelle said, while visiting the club’s fishing pier recently. Her mother, Chasity (cq), confirmed, “Her fishing pole is right next to the front door. She’s ready to go anytime!”

Her angling has included fishing at Sandy Hook in Monmouth County, in addition to the surf and back bay in Margate, where she lives with her family. “I mostly get a lot of throwbacks,” she said, “and still hope to catch a big one for dinner.”

And if she doesn’t catch anything to cook at home, there’s always fish on the menu at Catch, a seafood restaurant in Longport, operated by her mother and father, Joseph, where Joelle helps seat guests for dinner. That job will end August 23, when she leaves for the University of Vermont, where she will major in biology. Her ultimate goal is to become a doctor. While keeping her options open regarding a medical specialty, Joelle already had some operating room experience in India. Under a program sponsored by the Congress of Future Physicians, she and about 60 other high school students traveled to Ahmedabad last summer, and had the opportunity to witness surgery.

“It was really exciting,” she said, enthusiastically. “I got to see two C-section deliveries and held a five-month-old baby. I also saw a doctor perform intestinal surgery.” That experience heightened her desire to enter the medical field, but it all began when she took biology as a high school freshman and then anatomy. “That’s when I was really hooked on becoming a doctor.”

Her choice of college major and goal to be a doctor fit perfectly with the OCFC scholarship program which awards $500 annually to a deserving graduate. OCFC has awarded a scholarship for the past 12 years to an Ocean City High School graduating senior who intends to continue his or her education in biology, environmental sciences, oceanography, or related fields.

Joelle was recommended for the scholarship by the faculty and administration at Ocean City High School. The award was presented to her by Margaret Feil, club secretary, at a scholarship ceremony earlier in June. Founded in 1913, OCFC is the oldest, continually operating fishing club in the country. 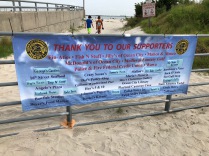 The two-hour event was curtailed after just a little more than hour of fishing, when the first thunder claps sounded and radar indicated lightning strikes just two miles away.

“Everyone cooperated when we had to call a stop to the event because of the storm coming,” said Ed Hoban, the fishing club’s chairman of the event, which was held on the beach near the Ocean City-Longport bridge. “It’s safety first—You have to do the smart thing. No sense putting anyone in harm’s way.”

Up until that time, the youngsters’ spirits ran high in anticipation of winning prizes donated by many local merchants and organizations that support the tournament. Top prizes of brand new Huffy bikes, trophies and ribbons went to Danielle Audet, 10, of Lumberton, who led the girls division, and Justin Lowery, 11, of Woodstown, representing the boys division, for catching the largest fish. Both landed summer flounder, with Danielle’s measuring 16.25 inches, while Justin’s was 15.5 inches.

“It was very exciting to catch such a big fish,” Danielle beamed. “I felt it was there on my line and then I thought I might lose it!”

“We’re probably going to continue giving the bikes for another five years,” said Susan Terrey, representing the Miller family who has donated the bikes the last two years in memory of Ralph Miller, who was chairman of the tournament, and his wife, Marion.

All the boys and girls who fished in the tournament received prizes, ranging from backpacks and magnets to various gift and food certificates. The first, second and third place winners who caught the most fish in each age category took home a rod and reel, along with place ribbons.

First, second and third place winners in the 8-10 age group were Luke Whitworth, Kyle Markley, and Julia Roman. Whitworth and Roman also were overall winners of the most fish caught by a boy and a girl, with Luke landing 8 bluefish and Julia catching 2 fluke.

After he landed a six-inch kingfish, Mattia, 14, of Furlong, PA, said he’s participated in the tournament a couple times and credited his grandfather with teaching him to fish in salt water.

In all, the youngsters landed 32 fish, many of which were small bluefish, some fluke, and a smattering of other species, including sea robin. Her third year in the tournament, Courtney Stimson, 13, of Monroeville, reeled in the first fish caught, a 9.25-inch kingfish.

“I didn’t think I had anything on my line at first,” she said excitedly, “but I just kept reeling in and there it was!”

Fishing club volunteers had the youngsters’ parents or guardians sign waivers for insurance purposes and register the boys and girls. Club members also manned the beach with measuring devices to record sizes of the fish the youngsters caught.

“It’s the first year we had waivers to sign,” said Frank Pizzutilla, Ocean City Fishing Club president. “It’s a smart thing to do and I want to thank everyone for understanding and cooperating.”

In addition to measuring fish, volunteers also helped the younger anglers cast and gave fishing advice to those who were novices. One dad, who preferred to remain anonymous, appreciated assistance given by club member Bob Dever.

“Thank goodness for his patience,” the father said. “I didn’t have a clue!”

The fishing tournament was held in cooperation with the Ocean City Department of Recreation. Founded in 1913, the Ocean City Fishing Club is the oldest, continuously operated fishing club in the nation.